With the death of Winston Moseley bringing some closure to the sad case of Kitty Genovese, it’s a good time to revisit one of the greatest books written about the episode, No One Helped. Marcia M. Gallo’s account explores the context in which the crime occurred, which fueled the narrative of urban apathy. She follows that thread to the lasting legacy of Genovese, whose murder led to positive change, such as the birth of the 911 system.

We can happily turn the page on Moseley, but Genovese’s story is worth remembering. And Gallo’s wonderful book is worth another read.

“No One Helped”: Kitty Genovese, New York City, and the Myth of Urban Apathy

From an early age, I longed for the big city life. Growing up in a sleepy township that didn’t even have sidewalks will do that 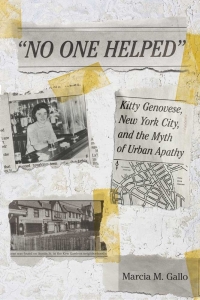 to a kid. To dissuade me from fleeing the Rust Belt for bright lights and tall buildings, my parents served up the tale of Kitty Genovese, the New York woman who, in 1964, was famously murdered on a Long Island street while everyone just stood back and watched her die.

It terrified me. In my mind, I envisioned a crowded street, broad daylight, pedestrians having to sidestep this dying stranger as she pleaded with them for help.

It wasn’t difficult to imagine. Though not the best time for New York City, the 1970s and early ’80s was a fruitful period for dystopian cinema set in the metropolis. My impression of the city was shaped entirely by Escape from New York and Fort Apache, the Bronx.

Though the story of a woman left to die on the sidewalk stayed with me, I never actually learned her name until college, when we studied the case in psychology class. Many psychology classes, actually. At the time, the prevailing narrative was still treated as gospel: 38 neighbors watched and did nothing as Winston Moseley assaulted Genovese, left, assaulted her a second time, left, and came back a third time to finish the job.

It’s hard to fathom how this could happen, and of course, it didn’t. At least, not the way it was reported in 1964, and certainly not the way it had been mythologized by the time it reached my ears as a cautionary tale. A more accurate telling was done by Kevin Cook in 2014’s Kitty Genovese: The Murder, the Bystanders, the Crime that Changed America.

The focus of Marcia M. Gallo’s “No One Helped”: Kitty Genovese, New York City, and the Myth of Urban Apathy is not so much on the murder as the social incubator in which the narrative of urban apathy was spawned and evolved — and how, by focusing on the witnesses rather than the victim or perpetrator, Genovese “had been flattened out, whitewashed, re-created as an ideal victim in service to the construction of a powerful parable of apathy.”

The biggest omission from Genovese’s story, writes Gallo, a history professor at the University of Nevada, Las Vegas, is that she was a lesbian. Being young, pretty and white made her the perfect media martyr, so details of her romantic preference would have been inconvenient to the “ideal victim” narrative in 1964. As the story of her murder took on a life of its own, she became a nameless victim of urban decay — more of a plot device than a character in her own horror show.

“No One Helped” is on the shorter side, but Gallo deftly packs in a lot of information — and unpacks five decades of history. The chapters are like linked short stories, exploring in turn the history of Kew Gardens and the racial tensions of the time, the changing media landscape and the marketability of an erroneous New York Times article that fumbled the facts but resonated with “white flight” suburbanites.

As for Genovese, Gallo writes, the article “rhetorically reduced her to the chalk outline left on the sidewalk at a crime scene after a body has been removed.”

About those 38 witnesses? Only four were actually called to testify at the trial, and even fewer were aware that Genovese had been stabbed. The Times failed to mention the fact that Moseley’s initial assault was interrupted by a neighbor’s intervention, and his second assault took place in a darkened back hallway beyond the vantage point of any neighbors.

Gallo writes, “In all of the accounts that have followed in the story’s wake, what has rarely been noted is that there is only one actual eyewitness to Genovese’s death. That person is her killer, Winston Moseley.”

In reclaiming Genovese’s identity, Gallo reveals her personal connection to the case. She does so in a tasteful, informative manner, steering clear of navel gazing and drawing attention instead to the resonating significance of the story.

For all the horror of the Genovese murder, and its aftermath, it also gave birth to the 911 emergency response system and community policing efforts. It furthered the movement to reexamine our societal acceptance of intimate partner violence (some witnesses had dismissed the assault as a “lover’s quarrel”).

And it exposed racial bias in crime reporting. Just two weeks earlier, Moseley had assaulted another woman, murdered her and set her on fire. “Significantly, no photographs of Moseley’s earlier victim, Anna Mae Johnson, a young black woman, ever appeared. Within weeks she would fade from most popular versions of the story, as would her killer,” the author writes.

Most of all, for Gallo, the legacy of the Genovese murder still matters “because it raises the central question of how we engage with those around us, individually and collectively, when they need our help.”

Digging beyond the murder and the myth, Gallo has penned a remarkable portrait of Genovese and her enduring legacy a half-century later. Her murder inspired an entire branch of psychology, but perhaps her lasting impact on social science will be the study of media myth-making. No matter the fables and fallacies that have emerged, the impact of Genovese has endured.

I’ve been on the Long Island Railroad, and at the Kew Gardens stop, it’s impossible not to look down at the nondescript parking lot and the neighboring houses, all crammed together, and wonder how this could have happened.

After 50 years, we know it happened differently than we’ve believed, but the true story of the assault is still as brutal and horrifying, if different, than we imagined. Gallo succeeds in redirecting our attention from the “witnesses” to the victim, who became a footnote to the fable. “No One Helped” restores the individual who existed before the chalk outline.