We Should All Be Feminists

This brief and brilliant essay (it comes in around 20 pages) from the celebrated author of Half of a Yellow Sun, Americanah 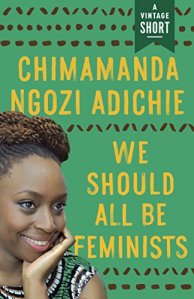 and Purple Hibiscus is one of the most interesting pieces I’ve read all year. It was adapted from Adichie’s famous TEDxEuston talk, and whether you prefer the visual or the text, make sure you get a hold of one of them.

“Feminist” is a word long-since stripped of its original meaning: politicized, glorified, demonized. It’s got more ill-fitting baggage than an overhead compartment. Adichie cuts through the connotations to get at the core value of feminism and how it celebrates and benefits both men women.

Reading this essay brought me back to my first day of Human Sexuality class at Penn State. “How many of you consider yourselves feminists?” the teacher asked. None of us men raised our hands (I hadn’t yet learned that, by definition, men could be feminists), and maybe only half the women raised theirs.

The teacher asked the hands-downers why they weren’t feminists, and though the reasons they gave were myriad, every response was prefaced with some variation of “I support equality and fair treatment and don’t believe that women are inferior to men, but…”

The teacher’s point, of course, was to show the class how this word had been bastardized and appropriated by so many groups for so many reasons that half the women disowned the label. Adichie shares similar anecdotes of her own struggles with the term.

This was almost 20 years ago, and the word “feminist” is more loaded than ever. With one or more women expected to compete for the presidency in 2016, attack-ad narrators are surely practicing their intonations for the coming voice-over work.

The Nigerian-born Adichie addresses one of the most common criticisms of feminism: Why the gender-specific language? Why not humanist? Or equalist?

“Because that would be dishonest,” Adichie writes. “Feminism is, of course, part of human rights in general—but to choose to use the vague expression human rights is to deny the specific and particular problem of gender. It would be a way of pretending that it was not women who have, for centuries, been excluded. It would be a way of denying that the problem of gender targets women. That the problem was not about being human, but specifically about being a female human.”

But this isn’t an essay about terminology. It’s a call to arms to imagine a generation of children raised without the biases that, consciously and unconsciously, perpetuate gender norms. It’s a call to rethink masculinity so that the next crop of men grow up healthier than the last. It’s a call for all of us to “do better.”

The essay may be short, but the conversation it generates is long and important.