The Reader’s Brain: How Neuroscience Can Make You a Better Writer

Most books on writing have the same fatal flaw: They may be inspiring and informative, but they seldom offer

practical advice. Typically, you’ll get some variation of the following: write something every day; write what you know; active voice; character before plot.

Yellowlees Douglas wants to change that with The Reader’s Brain. Drawing on science rather than Strunk and White, she offers tips on how to be a more effective writer, whether you’re penning the Great American Novel, writing a grant or constructing an internal memo.

I spent three years and thousands of dollars in an MFA program where it was bad form to talk about sentence structure. Seeing Douglas give it the attention it deserves was refreshing.

The Reader’s Brain is not just a collection of tips and tricks. Douglas provides a compelling narrative, sharing anecdotes from her years as an author and professor, to guide the reader through the chapters.

The difficulty with reviewing a book like this is that it’s hard to give details without giving away too much information. Since it’s on the book jacket, I can say that it centers around what Douglas calls the five C’s: clarity, continuity, coherence, concision and cadence. In exploring these concepts, Douglas shows how to utilize devices such as priming and causation to create narratives that capture the reader’s attention and keeps your words in their memory.

A worthy addition to any writer’s nook.

Want to start a conversation with me at a party? Mention House of Leaves. I’ll wax ecstatic on Mark Z. Danielewski’s 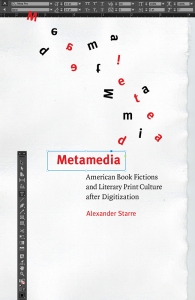 masterpiece for hours. So of course I loved Metamedia, an exploration of literature in the digital age, which uses House of Leaves as its jumping-off point.

For those unfamiliar with Danielewski’s debut novel, it’s… well, it’s not easy to explain. The five-word synopsis I’d offer is that it’s a found-footage film in book form, but what does “book” mean here? Sure, it’s on paper, with binding, but with its manipulation of text (sometimes sideways or upside-down or spread over numerous pages) Leaves could never be reduced to just the words themselves.

This leads Starre to ask, “How does the idea of a literary work change when we think of it not as a text, but as an embodied artifact?”

As a lover of both physical books and digital technology, I have no bias in this area. I have a classic Nook, a Kindle tablet and boxes of books that I won’t get through in my lifetime. I’ll read any time, any place, any way, and I appreciate the tone with which Starre discusses the topic.

If you’re looking for a work that romanticizes the digital frontier or deifies the paperback, this is not it. Metamedia applies history and theory and offers a unique perspective that will be of interest to academics and general readers.

And will hopefully inspire those who haven’t to read House of Leaves.

Workshops of Empire: Stegner, Engle, and American Creative Writing during the Cold War

As a survivor of an MFA program, there are a lot of ways I would describe writing workshops, but until reading this

book I never imagined a connection to the Cold War. Leave it to the University of Iowa Press, the publishing wing of the school that invented the Platonic form of the modern workshop, to offer this rich, counterintuitive history of the MFA.

But following World War II, Bennett argues, there developed an optimism that “the complexity of literature” would fend off the proliferation of simple sloganeering. Advances in science and technology had created weapons of terrifying power. It was time to advance the study of human nature, which happened to coincide with an increase in college attendance, thanks to the GI Bill.

“To understand creative writing in America, even today, requires tracing its origins back to the apocalyptic fears and redemptive hopes that galvanized the postwar atmosphere,” Bennett writes.

I’ve often mused about how the World Wars produced more great fiction writers than any others, and Bennett helps explain (in part) why this was: “Veterans wanted to write, and taxpayers were willing to pay for it.”

Bennett’s focus is on the Cold War era, particularly two of the most influential figures in the history of the MFA: Paul Engle and Wallace Stegner (who founded the programs at Iowa and Stanford respectively).

It’s a fascinating read and should be required reading for anyone enrolled in or considering an MFA program.