Peter Clines is my new favorite author in the horror universe. His previous novel, 14, was a page-burner that flipped 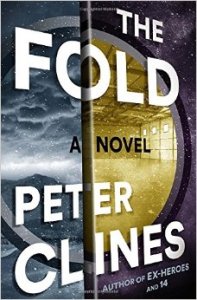 the haunted house tale inside-out (quite literally). For his new book, he makes origami of the space-time continuum.

The Fold begins on the last day before summer vacation. Mike Erikson is a high-school English teacher with a special talent: he never forgets anything. This is both a blessing and a curse. He’s intellectually gifted, but suffers the burden of remembering everything that has ever happened to him. At the prodding of an old friend, he audits a secretive research project in San Diego known as the Albuquerque Door.

At first, the Door — which facilitates trans-dimensional travel via a shortcut through the multiverse — is considered a breakthrough. By a simple bend in space-time (and with the help of some Victorian-era equations), the research team is able to transport objects, animals and people from one place to another.

Erikson soon detects something off with the project, though. Despite the personal rewards and social benefit that would accompany the announcement of their world-changing discovery, the scientists (who are suspicious of his investigation) keep the Door in development for years.

Oh, and there is also that seldom-discussed matter of the researcher who went through the Door, suffered a mental breakdown upon return and has been institutionalized since.

As Erikson digs deeper, he uncovers the shady history of the project and its shortcut through the multiverse. It all comes apart when a transport goes badly. The Door opens a pathway through a nightmare dimension that could destroy all others if they can’t get it shut.

That’s when this dice-roll with the universe becomes a Frankensteinian fable.

Clines is a master at developing quirky heroes in slanted realities. He doesn’t rely on gore, violence or trauma to create a sense of unease. He terrorizes with subtlety, pointing out the off-kilter among the mundane and letting it gnaw at the reader’s mind.

There is horror that sucks you down the rabbit hole through a trap door. Not Clines. He takes you there via quicksand. The dude is merciless.

The Fold incorporates many genres, from detective fiction and literary horror, to science fiction and Lovecraftian terror. Clines’ prose sweeps you through the chapters, breathing in and out of the tension without ever losing the narrative pace. I could have easily read this in one sitting, and just may have if my plane hadn’t landed in Reykjavik before I reached the end.

Though easily one of my favorite books of the year so far, The Fold does have some flaws. Erikson, on the whole, is an engaging and likeable protagonist, and for the first 200 pages or so is entirely believable. However, as we approach the climax he becomes too powerful and loses his vulnerability. It’s easy to root for the humble, nerdy English instructor. Not as much when he’s able to score women outside his area code and fend off other-worldly monsters more skillfully than the Marines.

Despite these stretches of the imagination, The Fold, is a smart thriller that uses quantum physics as a launchpad for terror. Like Lovecraft, Clines knows that the greatest threat is not the one that seeks you, but the one you stumble upon, that stares back at you when you gaze too long into the abyss.

In any dimension, the greatest threat to mankind is, well, mankind. The greatest horrors are those of our own making.

Understanding this is what makes Clines one of the best horror writers of the moment — and makes The Fold a must-read summer thriller.