In 1996, Dan Baum published the definitive account of America’s complicated relationship with psychoactive

substances. Smoke and Mirrors: The War on Drugs and the Politics of Failure is an exhaustive, apolitical narrative history of the war’s origin, evolution and cost, and though public opinion has changed (a recent Pew Research study found that Americans now favor treatment over prosecution and are against mandatory minimum sentencing by a two-to-one ratio), the book remains an important document of the human toll of the drug war.

I bring up Baum’s work because Drugs Unlimited: The Web Revolution That’s Changing How the World Gets High, by UK journalist Mike Power, is its 21st century bookend. At the time Smoke and Mirrors was penned, the Internet was in its infancy, data transfer rate was measured in kilobytes and computer literacy was limited.

In the decades since, the Web has expanded the chemical landscape, altering which drugs we do, how we acquire them, and in an effort to stay a step ahead of the law, Power writes, producers, suppliers and consumers have shifted into the wildly erratic world of “research chemicals”—legal alternatives to and analogues of illegal compounds sold widely over the Internet.

The consumption of psychoactive plants is nothing new (the earliest known head trip dates back about 13,000 years), but until the 1970s and ’80s, recreational drug users had only a handful of chemicals to choose from. In 1971, the United Nations identified just 234 legal substances; 243 new compounds have been identified in just the past four years.

These new chemicals are often untested, of shady origin and composition and can be far more lethal than their outlaw counterparts. They’ve also inspired media-invented “epidemics” of bath salts and synthetic marijuana—fueling a digital age reefer madness that keeps drug policy mired in the past.

But Drugs Unlimited is as much about hypertext transfer protocol as politics. The psychonauts who once explored inner-space have journeyed into cyberspace, and the market has moved from the corner to the CPU.

Power’s narrative is thorough and engaging, but at times can be too thorough, particularly when it comes to the chemical names. For example, Power is compelled to include a complete stock list from a chinese distributor, which includes more than 90 compounds with names like 5-MeO-DALT, Methiopropamine (MPA), Fluoromethamphetamine (and its analogues), Desoxypipradrol (2-DPMP) and so on.

Granted, he does this for effect: “Among that unreadable alphabet soup of drug names there are hallucinogens, stimulants, empathogens and cannabinoids. Working out which of them are legal or which have been outlawed in various countries would require thousands of hours of legal time or case law study.”

This certainly helps shed light on the challenges facing consumers and law enforcement, but at times, the emphasis on product names can be overwhelming.

Aside from that, Power crafts an accessible narrative that is one of the most important books of the millennium. What Baum did for the American drug war, Power does for the U.K., from the digital age to the Deep Web.

The Triangle: A Year on the Ground with New York’s Bloods and Crips

While Drugs Unlimited operates at a broad level, The Triangle goes micro. For a harrowing year, journalist Kevin 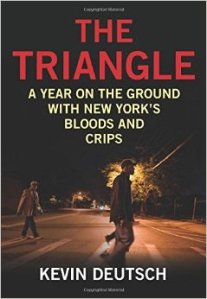 Deutsch shadowed the gang-bangers of Hempstead, Long Island, in a place known as the Linden Triangle—ground zero of a 2012 turf war that turned an already rough neighborhood into a slaughterhouse. Forget the stereotypes of suburban Long Island. Think The Warriors rather than The Great Gatsby.

Dramatically reconstructed from interviews, legal records and first-hand experience, The Triangle is as fast-paced and action-packed as a first-rate thriller—a literary narrative as entertaining as it is troubling. The cast includes leaders, hitters and corner crews from both the Bloods and Crips; the terrorized residents of Hempstead; cops, criminologists and others in the justice system; and a minister who leads midnight prayer groups on the corners.

Deutsch stitches together their stories with a novelist’s skill. He’ll (rightfully) earn high marks in the press for his research and daring, but his ability to manage this Dostoyevskian cast without disrupting the narrative flow is worth noting.

Racial and social problems emerge that are intrinsic to the drug war. Incarceration and surrounding gentrification has turned Hempstead into an island of poverty. The gangs are the biggest employers in the Triangle, and those who would oppose the gangs are financially trapped in their territory.

Deutsch doesn’t give us an easy out. The reader is forced to confront the capriciousness of life in Hempstead, the social and legal conditions that created it and the self-defeating strategies of the gangsters that maintain a vicious status quo.

There is something heroic about the ability to survive in this environment, particularly in defiance of hateful neighbors (one Nassau County government official recommends that they “carpet-bomb Hempstead”: “Let the blacks and Hispanics go back to New York City. They’re better off there. Long Island isn’t that kind of place.”) Yet, Deutsch is wise to avoid romanticizing thug life, and not afraid to reveal the cowardice of its so-called soldiers:

Tyrek, leader of the Crips set, earned his membership by stabbing a pregnant teenager in the stomach. His ace card in the turf war is a suckerpunch, not a fair fight. J-Roc, a rising soldier in the Bloods, talks a big game, but struggles to intimidate a senior citizen. Ice, leader of the Bloods, helps promising kids get an education, yet orders the kidnapping and gang-raping of his rivals’ sisters, girlfriends and mothers.

Sadly, for all the lip service about honor, the Crips and Bloods mostly prey on the vulnerable. The true casualties of this war are the women in the crossfire. “The gangsters see sexual violence as a strategic and tactical weapon, as important to their arsenal as guns and blades,” Deutsch writes in the chapter “Extreme Tactics,” which includes the retaliatory abduction and gang rape of a female Crips employee.

At least the victim, in this case, actually works for the gang. That is not a prerequisite. Flex Butler, a Crips lieutenant, brags about assaulting the 15-year-old sister of a guy who’d stolen $2,000 worth of cocaine.

“‘[He] was hiding from us,’ Flex says. ‘So we got his sister when she was walking home from school. She fought hard, but there was a lot of us.’”

So yeah, these are not sympathetic characters. Deutsch doesn’t condemn, patronize, glorify or victimize, but presents the residents of Hempstead in all their unresolved moral complexity. For the most part, he avoids the cinematic histrionics common to gang narratives. The lone exception is D-Bo, a promising kid whose attempt to escape the corner gets a bit of the Hollywood treatment. Much is made of the timing of a confrontation with his gang (even though he’d been at home for a month), which leads to a chase scene, a misunderstood shooting and a dramatic exchange between the corner boy and the officer who tried to help him escape while awaiting the paramedics.

But I’ll forgive Deutsch this one instance of going for the heart strings. Otherwise, this is an unflinching look at the fear, fame and futility of gang warfare.

Strong writing, compelling characters and front-line reporting make this an entertaining read, but Deutsch’s detached, yet compassionate handling of the material makes The Triangle an important one as well.

Both Drugs Unlimited and The Triangle are worthy books on their own, but for anyone with a love of history, sociology or just damn good journalism, this is a one-two combination that, together, offers a wide perspective of the War on Drugs.