Stumbled upon this at my favorite local used bookshop, the Bookworm in Boulder, Colorado, 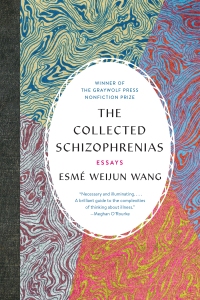 and what a lucky find. I was unfamiliar with Wang’s writing, but loved the theme of this essay collection: her life with schizoaffective disorder and other explorations of mental illness.

Through essays that combine research and personal experience, Wang shows us the different flavors of schizophrenia, which are more diverse than public perception or TV and film portrayals.

She addresses the media portrayal head on in the essays “Reality, On-Screen” and “The Slender Man, the Nothing, and Me,” which are, in turn, shocking and heartbreaking. The author — who is both wickedly smart and funny — studied at Yale and Stanford, yet, during psychotic episodes becomes so unmoored that her husband has to explain that movies and television shows are fictional.

She also explores the topic of involuntary commitment, the ethics of procreation and delves into the darkest corners of mental illness: violence (rare in actually, but over-represented in the media) in “Toward a Pathology of the Possessed” and Cotard’s delusion (belief that oneself is dead) in “Perdition Days.”

My favorites are “Diagnosis,” the lead essay that introduces us to her journey, and “Yale Will Not Save You,” which reveals the shortcomings of academic institutions in addressing the mental health needs of students.

The Collected Schizophrenias won the 2019 Graywolf Press Nonfiction Prize, and that means something. Graywolf Press publishes incredible books that challenge and enlighten, such as Carmen Maria Machado’s Her Body and Other Parties, which I consider to be one of the best books of the decade.

Likewise, The Collected Schizophrenias will challenge your preconceived notions of mental illness, introduce you to its many manifestations and delight you with confident prose, brutal vulnerability and a narrative quest that is more of a question than an answer.