In anticipation of visiting Paris, I wanted to bone up on my French philosophy. I’d devoured Camus and Sartre, but

was light on the third member of the Le Deux Magots triumvirate, Simone de Beauvoir. So en route to Saint-Germaine-des-Prés, I read volume I of her seminal 1949 book, The Second Sex.

It was intended to be a pleasure read, not a book to review, but then Vanity Fair published a cover photo of Caitlyn Jenner. This opened an interesting and unexpected dialogue about gender identification. If you stick to legitimate outlets, the discussion has been civil, informative and worthwhile. The New York Times, in particular, has provided engaging commentary.

I bring this up because, well, de Beauvoir was writing about gender identity nearly seventy years ago and her words remain relevant. Remarkable, really, when you consider that she wrote the first volume prior to the civil rights movement.

Disclaimer: This column is mostly a review of the book, not a commentary on Jenner, the cisgendered and transgendered communities, or the definition of a “woman.” Of course I have my opinions. I’ve had many transgendered friends, co-workers and clients, and personally, I’ll refer to you by whatever pronoun you’d like and recognize you as whatever gender you identify with.

But I believe the role of cisgendered, heterosexual men in this discussion is to listen and learn from it. The only edict I’ll deliver is that we all could benefit from reading de Beauvoir. Especially now.

In the first part of The Second Sex, de Beauvoir argues that mere physiology is not enough to define gender. One of the lines that most stuck out for me was, “It is not nature that defines woman; it is she who defines herself by dealing with nature on her own account in her emotional life.”

Remember, this was more than half a century before cisgendered entered the layman’s lexicon. 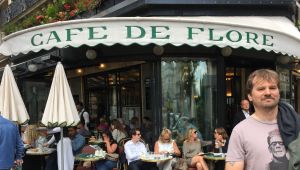 De Beauvoir emphasizes that environment plays a profound role in gender development. Environment includes everything from external forces (de Beauvoir considers the role of psychology, religion and myth in identifying women as an “Other”) to internal feelings and expression.

“…it is not the body-object described by biologists that actually exists, but the body as lived by the subject. Woman is a female to the extent that she feels herself as such. There are biologically essential features that are not a part of her real, experienced situation…”

The breadth of The Second Sex is astounding. De Beauvoir surveys the fields of biology, psychology, literature and religion with a thoroughness that is impressive as much as it is purposeful. She’s not lecturing as she is constantly working through her thesis in excruciating detail. De Beauvoir isn’t discussing single-cell reproduction for the hell of it. She is constructing a logical stronghold that still stands.

Yes, it can be tedious at times, but her argument was meant to transcend its time, as it has. It’s worth the struggle.

Of course, existentialist thought permeates the book, but it plays different than that of Camus and Sartre. Whereas

those guys, awesome though they were, often deal with abstracts and ideals, de Beauvoir is working at more of a gut level. She is fighting for privileges her two comrades take for granted.

While the continued relevance of The Second Sex speaks to the brilliance and vision of de Beauvoir, it’s also an unfortunate reality. It would be preferable if this book felt more dated, but as most commentaries on Jenner reference The Second Sex, I think we have not come as far as we should have.

But the fact that we’re having this conversation is progress, and we owe a great debt to de Beauvoir’s contributions. It’s best, I think, to let her have the final word on this topic and leave it at that:

“…it must be repeated once more that in human society nothing is natural and that woman, like much else, is a product elaborated by civilisation.”

Leave a Reply to Becky | Been There, Seen That, Got the Postcard Cancel reply