I’ll start with a confession: This review has come along sluggishly. Time I’ve set aside for writing has instead been frittered away on mindless online gaming. It’s an affliction we’ll call 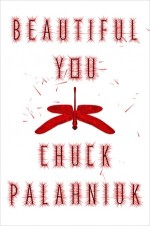 writus interruptus, and it’s likely to become an epidemic worse than any zombie apocalypse.

(Speaking of, my current addiction is The Last Stand: Dead Zone, and before I completed this sentence I had to stop to check on the construction status of a barricade.)

This isn’t anything new, really. In the 1950s, scientists discovered that if a rat could stimulate its brain’s pleasure center by pressing a bar, it would do so furiously until it passed out from exhaustion and, in many cases, died for lack of food and water. Mind you, the rats had access to food and water, but they couldn’t keep their paws off that pleasure bar.

This should sound familiar to any gamer who has missed a meal in order to level up.

It’s sick and wrong. I know this, but I need someone to hold up a mirror to face this absurdity directly.

This is why I love Chuck Palahniuk, whose new book, Beautiful You, is his best in a few years.

Fittingly, it concerns arousal addiction, and serves an electric shock to our collective conscience (or perhaps unconscious would be the better term).

Palahniuk took on male malaise with Fight Club, and mocked cultural over-consumption with Choke. Snuff (ostensibly a novel about pornography) lampooned self-destructive excess and exploitation in a manner that could very well have served as a hyper-sexualized predictor of the impending financial crisis of 2008.

In Beautiful You, he wanted to write what he calls gonzo erotica, and in the process has penned an anthem for an overstimulated, multi-tasking, computer-coma society.

Penny Harrigan is a nice Nebraskan girl working in New York City when she catches the eye of the world’s richest man, C. Linus Maxwell. Next thing you know, Penny is the talk of the tabloids and the envy of her coworkers.

Behind closed doors, however, is where Penny is truly transformed. Maxwell introduces her to a world of unimagined, if clinical pleasure. Penny has her reasons to question Maxwell’s motives (especially after a bizarre bathroom tryst with his bitter ex-lover), but is too enraptured with her newfound fame and sexuality.

It’s why Romero’s Dawn of the Dead was set inside a shopping mall—can you truly be sure there aren’t a few zombies among you inside the IKEA? Ever been to a restaurant where a group of supposed acquaintances are each focused on their own smartphone or tablet?

We are the lab rats hammering away at the pleasure bar for a taste of sweet, sweet oblivion.

And much like Maxwell, Palahniuk is there wearing a lab coat, taking copious notes and holding up a funhouse mirror to our cage, so that we might catch a distorted glimpse of what we’ve become.