I’ve always felt a deep kinship with Albert Camus. We both come from working-class roots, and we each found our way to journalism. That’s about where the similarities end. While I broke into newspapers as a music and features writer, Camus was editor of Combat, an underground political paper that was part of the French Resistance to Nazi occupation during World War II. 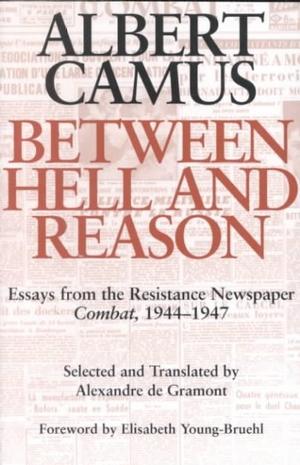 He and his co-workers were jailed and sometimes murdered. If you want to read some amazing and inspirational writing, pick up Between Hell and Reason, a collection of his war journalism. There is an immediacy to his writing, because he knew that every article could be his last.

If this book doesn’t get you up and off the couch (at least to go to the voting booth), nothing will.

However, that’s not the book I want to discuss today, although there is plenty disturbing about Nazi occupation. Truly, any Camus offering is unsettling, in the truest sense of the word, because that’s his intent. These are not pastorals. Camus does not soothe the reader with hugs and rainbows. He couldn’t care less about your spiritual nourishment.

Camus challenges the reader. He inspires the reader. Discomfited? Good. That’s a natural way to feel. The question is: What are you going to do about it?

So it goes in all his works, both fiction and non. My two favorite books of his, and two at the top of my all-time list are The Myth of Sisyphus and The Stranger. The Plague is one of his darker (and classic) works, but for our purposes at Unsettling Chapters, nothing matches The Fall.

Here we have the long-form confessional of Jean-Baptiste Clamence, who haunts the smoky confines of a lowlife bar in Amsterdam’s Red Light District. He tells his story to

an unknown, unseen audience, and that juices the narrative with an intimacy and informality we don’t always get from Camus.

It’s also inherently unreliable. What do we make of Clamence and his wild tale of falling from grace? Can we believe it to be true? Is it the ravings of a madman or a drunkard? Clamence even says, when describing a motto for his house, “Don’t rely on it.”

I’ve read The Fall twice, and I’m still not convinced that “we’re” even there. At the end, there is a shift suggesting that Clamence has been having a dissociative episode and talking to himself the whole time: “Are we not all alike, constantly talking and to no one…”

Clamence takes us on a guided tour of Amsterdam, which is designed, he says, in the nature of Dante’s rings of hell. We move through the city via his dramatic monologue.

But though setting has an important part to play, it is the narrator’s interior landscape at center stage. Clamence presents the anxieties of his time, and they look very similar to modern anxieties. He speaks for the fragility of man, and how one’s descent is incremental.

Camus nails the pathway of anxiety and how we are our own worst interrogators. He touches on thought perseveration, self-sabotage and even has an incident of road rage—perhaps its first mention in literature?

In turns hopeful and hopeless, Clamence is a man buried under the rubble of his failings, held down by his own hand. It’s a reminder that we make poor choices, focus our attention on the things that scar us, and ultimately, author our own demise.

I don’t imagine a film version will displace It’s a Wonderful Life as a holiday tradition, but for anyone curious about the workings of a mind in distress, you should wind your way into this twisted narrative.