Unsettling Chapters is a month-long celebration of dark fiction brought to you by Ensuing Chapters book blog and Transgress digital magazine. Every day through Halloween, we’ll feature reviews, discussions and recommendations of some of the most frightening books ever printed. Check back or subscribe to our feed for your daily dose of darkness. 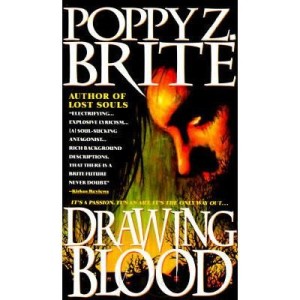 was heralded as horror’s fastest rising star. Twenty years later, in semi-retirement from fiction writing, Brite’s career has taken unexpected turns, and she has quietly put together one of the more interesting literary careers of contemporary authors.

For one thing, that’s the last usage of the pronoun “she” you will read in this piece. Brite, who has always prominently featured gay and bisexual characters in her writing, identifies as a man and has begun transitioning. Brite prefers to be addressed with male pronouns, and we are happy to oblige.

With that out of the way, let’s get to important matters: his writing.

From 1992-94, Brite published two merciless novels and a stellar collection of short stories (Wormwood). He didn’t make a splash in the horror world. It was an atomic bomb. And just at the right time. The genre had grown stale, with old masters losing steam and horror cinema bottoming out. Anne Rice was probably the exception as far as freshness and popularity, but her books and films were too appealing to the mainstream to appease darker tastes.

And then there was Brite.

Brite attracted a loyal goth following with his fractured tales of loners, transients and outcasts of all variety. This was horror for the disenfranchised, and his books made heroes of society’s rejects who found themselves drawn, through their outsider-ness, into fugues of violence and evil.

My favorite of his books is 1993’s Drawing Blood, which features two homeless youth—cartoonist Trevor McGee and computer hacker Zachary Bosch—who cross paths and form a romantic bond inside an abandoned house. Together, they are tortured by and confront Trevor’s haunted past (along with a little help from the music of Charlie Parker).

It gets even better: Legend has it that, in 1994, a man firebombing a mail store in Los Angeles set himself on fire. Inside the store, waiting to be shipped, were original copies of Drawing Blood. The books supposedly absorbed the smell of his burning flesh and became collector’s items, with copies of the $7 paperback selling for hundreds of dollars.

But this novel doesn’t need urban legends to succeed. Brite is at full-strength in this novel. He captures the humanity of his outsider characters, the weirdness of his short fiction and the depravity of the world with both existential and supernatural elements. 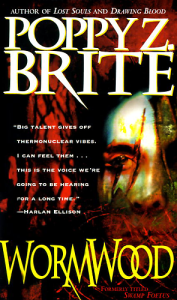 Speaking of Brite’s short fiction, Wormwood, his first collection, is another of my Halloween staples, especially the tales “Angels” and “His Mouth Will Taste of Wormwood.”

Following this remarkable opening run of books, he published Exquisite Corpse, which eased back on the gothic elements, but retained the horror. In later years, Brite has kept the dark but added comedy to his writing. He has a series of novels set in restaurants, and his nonfiction appears regularly in the Times-Picayune and other publications.

Brite is currently semi-retired from fiction writing, but fans (both old and new) can still relish in his early works each Halloween.