A close cousin of horror is transgressive fiction. These are novels, often dark 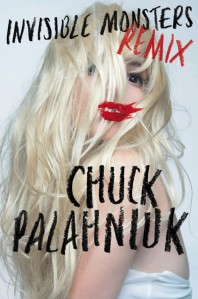 or dystopian, that break cultural taboos for the sake of social commentary and satire. Considered to be a working-class style of literature, classical examples of transgressive literature include the Marquis de Sade, George Bataille, some work by Dostoyevsky and the Beat writers. Contemporary examples include Bret Easton Ellis and Irvine Welsh. Currently, the definitive author of transgressive fiction is Chuck Palahniuk.

I have long admired Palahniuk’s writing, both for its satire and transgressive nature, and Invisible Monsters, one of his earliest works, is considered to be among his most disturbing and poignant. It’s an endless buffet of sexual disorientation, body modification, gender dysphoria, self-mutilation, fame-mongering, familial dysfunction, violence and manufactured reality.

But at its core, Invisible Monsters is about identity. Who determines one’s identity? Who defines who or what one is or is not? This can be sexual, biological, superficial. Identity is a personal, subjective thing. It’s also one that manifests physically. For these characters, mutilation is the method of self-expression, either by accident (Brandy), by gender reconstruction surgery (Evie) and by their own hand (the narrator, Shannon).

Palahniuk exaggerates these tropes to the degree that they become fabulistic, and because of that, he had difficulty getting the book published. At the time, Palahniuk was a bit of a mystery. Here’s a book that begins with a spinning shotgun and a room on fire, and it ends with… Well, time is a relative component of Invisible Monsters, so who the hell knows where it ends!

What we’ve learned of Palahniuk in the ensuing years is that his over-the-top approach is a monstrous distortion of our culture. In this way, he teaches us the value of the grotesque in satire. Shannon is a fashion model who intentionally disfigures herself, Brandy a homosexual who uses an accident as pretense for gender reassignment surgery. These are people who tear themselves apart, and the pieces don’t quite fit when put back together again.

In life, the deepest wounds are the ones that are self-inflicted, and it is the characters’ own hand that pours in the salt.

As if the novel wasn’t surreal enough already, this summer Palahniuk released an updated version of Invisible Monsters featuring new and rearranged chapters.

And if that’s not enough to help you reach your disturbance quota, check out his collection of loosely connected stories, Haunted, one of my favorites. Full of splatterpunk thrills, it’s a bloodbath worthy of the Grand Guignol.

His 2008 novel, Snuff, is another ick-inducing read, this time taking on the world of pornography. You can read my review of it here.